Site of the Month: French Island

This month we’re showcasing one of the newest sites in the TERN OzFlux network—French Island—and its measurement of methane and the dynamic coastal wetlands that protect our natural and managed landscapes.

Located in a salt marsh ecosystem on the south-west tip of French Island in Victoria’s Westernport Bay, the site became part of the TERN-supported OzFlux research network in March 2019.

Located on the lands of the Bunurong people, the French Island flux tower is managed by Associate Professor Ruth Reef as part of the Coastal Research Group at Monash University, with her PhD student Matthew Peck and technical support from Leigh Burgess and Tivanka Anandappa. Additional support for the tower comes from Parks Victoria and the Victorian Government Department of Environment, Land, Water and Planning (DELWP).

Measuring the dynamic coastal wetlands that protect our terrestrial systems

Salt marsh and mangrove ecosystems play a vital role in mitigating the impacts of sea level rise by providing a ‘surface’ for sediment deposition and increasing the elevation of the coastline. This ecosystem service is evidenced through geological records from the Holocene and through modelling of contemporary sea level rise, both of which show that mangrove ecosystems are able to keep pace with changes in sea level provided there is sufficient sediment supply.

The benefits of coastal wetland ecosystems do not stop with mitigating sea level rise. They also act as a buffer against storms and inundation of tidal waters for habitats further inland, attenuate wave energy, provide habitat for a wide range of terrestrial and marine species, and provide an important store of terrestrial carbon (also known as ‘blue carbon’).

Despite their importance, our understanding of how these coastal systems are impacted by natural disturbance, anthropogenic impacts and climate change is limited. The French Island flux tower provides valuable time-series data quantifying how CO2 exchanges change over time in this ecologically important coastal wetland community.

The site also falls adjacent to a RAMSAR protected wetland area – a global convention that identifies and conserves wetlands of international importance.

“Coastal wetland ecosystems are highly dynamic in nature. The French Island flux tower begins to unravel some of these questions about how, and to what extent, dynamic environmental factors, such as tidal regime, impact these ecosystems, particularly within a temperate climate setting.” 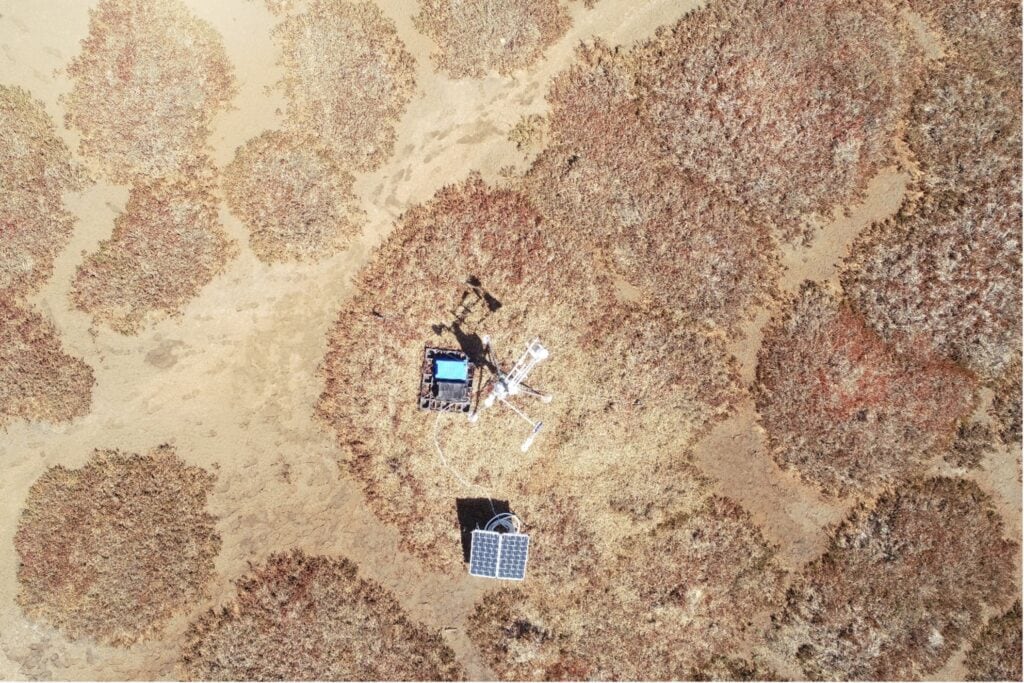 The French Island tower is located on a saltmarsh where 90% of the ground surface vegetation consists of Sarcocornia quinqueflora. The remaining surface vegetation is comprised of species including Sporobolus virginicus, Juncus kraussii and Tecticornia pergranulata.

The vegetation around the tower rarely grows above 1.2 m but the tide regularly exceeds this height.  It follows a mixed semi-diurnal regime and has a micro/meso tidal range of 0 to 3 metres above sea level (ASL).

Avicennia marina, a species of mangrove, forms a protective barrier around the shoreline and during the autumn and winter months (March to August), strong winds combine with spring high tides to flood the marsh periodically.

Water is transported to the upper marsh region, where the tower is located, along a series of creeks that intersperse vegetated mounds. The mound surface elevations range from 1 to 2 m (ASL) with creek beds lying below the 0.9 m mark. Water also pools in mudflats and saltpans separating the vegetation.

Inundation of the site is measured by a series of level loggers (Solinst) placed at six locations within the footprint of the tower. In addition, changes to elevation at the site are recorded through periodical surveying using a sophisticated RTK-GPS. These observations supplement the regular environmental flux measurements made by the tower.

“Understanding the data that our tower have captured has been challenging. Periods of inundation and the extreme nature of the environment (high salinity) have meant capturing and processing the data are quite difficult. We hope that our findings provide an insight into how these ecosystems operate under changing and dynamic conditions.” 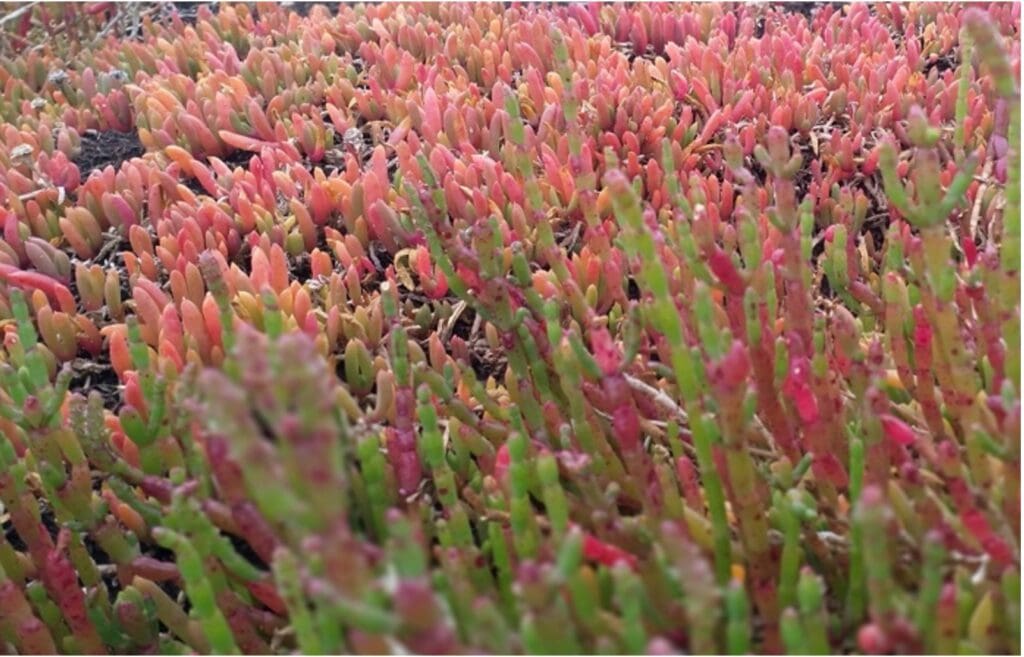 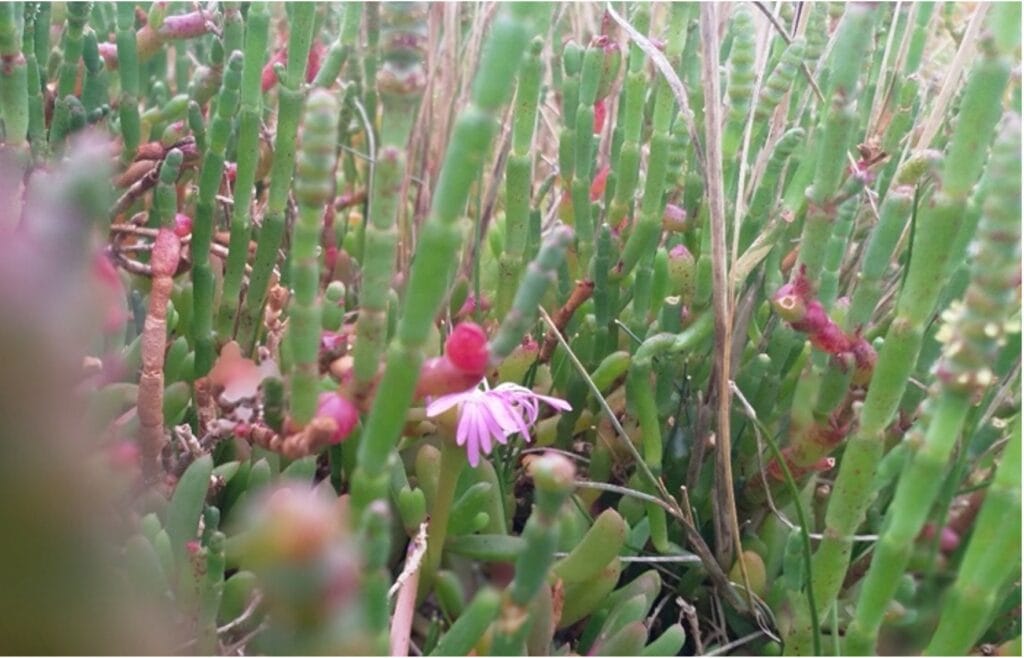 Not just CO₂: the importance of quantifying methane fluxes

“When I first ventured onto the saltmarsh, I was struck by the quiet stillness of the landscape. However, as I studied the processes at work in this environment, a dynamic microcosm was revealed. The beguilingly quiet saltmarsh was a hive of activity that hosted a multitude of living species. Sitting on the terrestrial boundary the saltmarsh was a living, breathing, giant that defended the land from the sea and provided a refuge for many animal and plant species.”

The saltmarsh ecosystem is dominated by dynamic plant life, which also gives rise to an active microbial community that is employed to decompose and recycle plant material. Plant and microbial respiration throughout the seasonal cycles of growth and decay generate CO2. But also, as the plant constituents are reduced in stages, microbes in the soil transform some of the organic carbon into methane (CH4) that finds its way back into the atmosphere. Therefore, a portion of the net CO2 captured by the ecosystem is annulled by these CO2 and CH4 emissions.

To develop a better understanding of the ecosystem’s impact on global warming, enhancements to the site’s monitoring infrastructure to measure combined CO2 and CH4 fluxes were implemented . A LICOR 7700 open path CH4 analyser together with a LICOR 7500 open path CO2/H2O analyser measure fluxes at the site. The flux footprint extends across an approximate radius of 120 m from the tower.

The mean daytime CH4 flux rate in summer and autumn tends to be positive (a net CH4 source but less than 0.15 μmol m-2 s-1) while the winter daytime mean is negative (a net CH4 sink). The CH4 fluxes were normally distributed between -1 to 1 μmol m-2 s-1 at the site throughout the record. Daily CH4 flux also has a strong positive correlation to ecosystem evapotranspiration.

Analysis of the combined long-term impact of CO2 and CH4 from the ecosystem in spring and summer revealed that the saltmarsh was a net carbon sink despite higher CH4 emissions in summer. However, the short-term analysis reveals a different outlook where summertime CH4 emissions are likely to exacerbate global warming rates along decadal timeframes.

Further studies using the data from the site are underway to identify the significant independent variables that control CH4 emission at the site in the hope of managing the carbon flows in this sleeping giant.