Site of the Month: Kopuatai Bog 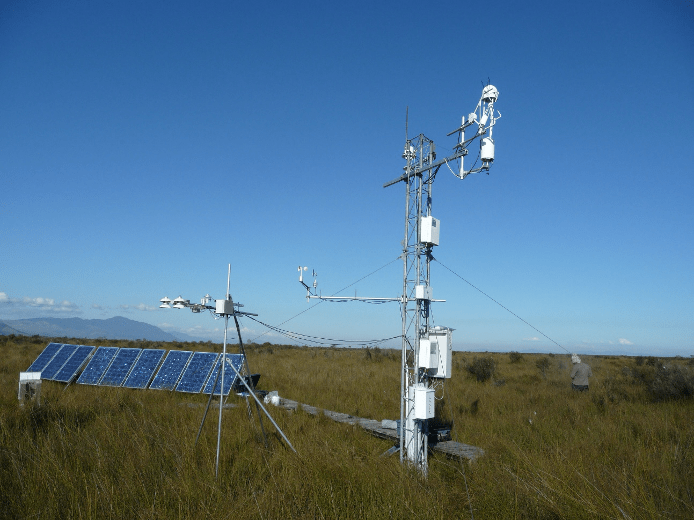 In this edition of Site of the Month, we’re off to Aotearoa (New Zealand) to learn more about the Kopuatai Bog, its unique biodiversity and storage of 24 million tonnes of carbon—the equivalent of more than five million cars driven for a year.  The OzFlux site’s research infrastructure provides critical insights on environmental change and the role that peatland ecosystems play in regulating the global carbon cycle.

The Kopuatai Bog (pronounced: Kop-ooa-tie) is located in the Hauraki Plains in New Zealand’s North Island (Te Ika-a-Māui*) in the rohe (territory) of the Ngati Hako people. The bog covers an area of almost 10,000 ha that is surrounded by dairy farms. The eddy-covariance flux monitoring tower was installed in 2011 and has since been continuously measuring and delivering data on the carbon, water and energy balance of the largest unaltered peat bog remaining in New Zealand.

The OzFlux site is run by Associate Professor Dave Campbell from the University of Waikato, who co-leads the WaiBER research group with Professor Louis Schipper, which includes eight ecosystem flux monitoring sites across wetland and agricultural landscapes in New Zealand.

*“The fish of Maui” – Maui was the great Polynesian navigator who caught a great fish using a hook made from the jaw of his grandmother. His brothers hacked the fish to eat, hence the North Island is so hilly.

How is a peat bog different to a swamp?

A peat bog forms over thousands of years as a swamp transitions to a fen and then a bog via accumulation of peat, along with a change in plant communities. Bogs are typically acidic and low in nutrients and oxygen, which results in accrual of plant material from a lack of microbial breakdown. Over time, this plant material can build up to form a dome, thus giving rise to the Kopuatai peat dome. In places, peat within Kopuatai Bog reaches depths of 12-14 m. This peat largely consists of water, up to 90%, yet it remains firm to walk on…

“…until you jump up and down, which causes the earth to move. It’s like standing on a quivering jelly.”

Kopuatai Bog is fed only by rainwater, as the domed shape cuts it off from groundwater and floodwater from the surrounding rivers. This means most of the bog has extremely low nutrient inputs, which is a primary driver of ecosystem processes. The mean annual rainfall for the area is 1,112 mm, and the mean temperature ranges from 13.4°C in January to 8.7°C in July.

The one plant that engineered the Kopuatai Bog

While most bogs in the world have peat accumulated from mosses, the peat that forms Kopuatai Bog accumulated from the root material of a curious vascular plant species, Empodisma robustum, or the jointed wire rush. This species and the rare giant cane rush (Sporadanthus ferrugineus) are members of the Southern Hemisphere Restiad family of plants, whose centre of diversity is Southeastern Australia. Although the flora of Kopuatai Bog is essentially Australian in origin, it now has the only viable population of Sporadanthus ferrugineus in the world!

Empodisma robustum is a true ecosystem engineer, and Dave has worked with his research students to uncover some of its self-regulatory functions that affect the carbon, water and energy balances. The dense canopy litter layer acts like a mulch and prevents water vapour diffusing from the saturated peat surface, so annual evaporation rates are effectively 75% of pasture rates, and summertime Bowen ratios can exceed four (sensible heat flux can be four times greater than the latent heat flux). Peat formed from this plant is compressible and floats so that the peat surface follows the water table up and down over an annual range of 30 cm or so.

As a result of its unique vegetation, the Kopuatai Bog has been listed as a Ramsar site – a global convention designed to identify and conserve wetlands of international importance.

The important role of peatlands in the global carbon cycle

The peat of bogs like Kopuatai is comprised of around 50% carbon which, based on studies of long-term carbon accumulation, has accumulated at average rates globally of around 50 grams of carbon per metre per year (g C m2 y-1).  With the peat reaching 12 m deep and accumulated over 11,000 years, that equates to approximately 24 million tonnes of carbon stored in Kopuatai Bog—the equivalent of more than five million cars driven for a year!

Despite the fact that wetlands globally are the largest natural source of methane to the atmosphere, research has found that bogs actually have a net cooling effect on the climate as their high uptake and storage of CO2 overrides their emissions of methane. This is especially true for Kopuatai Bog, which is sucking up CO2 four to six times faster than Northern Hemisphere peatlands.

“Part of this is due to the year-round growing conditions we have here in New Zealand,” says Dave Campbell.