Landscape blackened by fire mightn’t seem the most encouraging environment to entice people to contribute to science, but the TREND team, which likes a challenge, reckons it will work.

TREND, which is associated with TERN’s Australian Transect Network, is asking visitors to South Australia’s Cleland Conservation Park to help its scientists understand how the countryside recovers from fire. Controlled burning in conservation parks has long been controversial in Australia but is regarded by the park’s managers as vital to reduce fuel loads and manage biodiversity.

TREND has installed three photo points at the park in the Mt Lofty Ranges, in an area that was burned by park rangers two weeks ago. Signs at each photo point guide citizen scientists through the process of using their smart phones to take pairs of photos and submit them using the TREND Citizen Science app.

Point and click: a sign at each photo point shows citizen scientists how they can contribute to our understanding of how vegetation regrows after fire

The photo pairs are combined to form a 3D reconstruction of the landscape and its vegetation using technology that TREND developed in partnership with the Australian Centre for Visual Technologies (ACVT). The program manager of TREND, Mr Stefan Caddy-Retalic, of the University of Adelaide, says citizen scientists’ photos will contribute to scientists’ understanding of how vegetation regenerates.

‘By combining photo pairs to produce a 3D model and then doing that repeatedly over time, we can visualise and measure how the different species in a community come back after fire, how quickly things grow, and if fire changes the mix of species in an area, in specific detail,’ Stefan says.

‘There is no way we can collect this information ourselves, as it would cost far too much to have staff on the ground for the time we’d need to collect the data. So citizen scientists can play a role.

‘People join in because they enjoy being part of science. And the signs we have erected explain what we’re trying to achieve, and why burning is important. This is a great way for us to help engage the community in how parks are maintained, as well as provide useful data to the park manager, the South Australian Department of Environment, Water and Natural Resources.’

Facilitating public involvement in science has been built into the structure of TREND.

‘There are heaps of people who aren’t scientists, or who don’t work in our field, but who have knowledge they want to share, or who enjoy learning something more about the environments they like spending time in. And people love being able to contribute to scientific research,’ Stefan says.

‘TREND staff are keen to make the most of that enthusiasm. And we get data we’d otherwise not be able to afford to get. So everyone’s a winner!’ 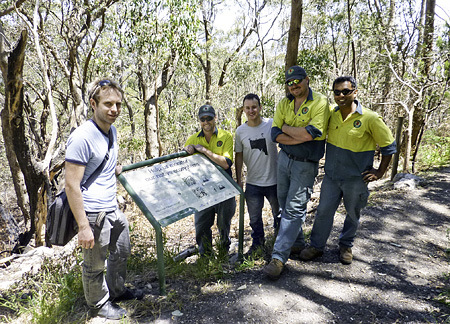