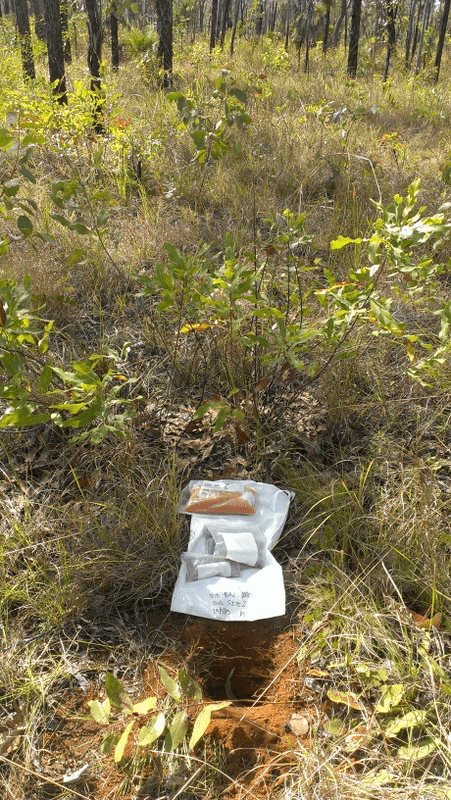 TERN’s AusPlots survey team, more used to the arid deserts of central Australia and the tall eucalypt forests of the south, is shifting its focus this field season to north of the Tropic of Capricorn in both the Northern Territory and Queensland.

The AusPlots team have had a hectic start to the year organising their field program for the next 18 months, setting up plots in priority areas chosen in consultation with state and federal agencies to fill data gaps and provide a national network of representative monitoring sites (outlined in the AusPlots Rangelands Survey Protocols Manual). Work in the coming year in northern Australia will include surveys in savanna areas south of Darwin and in the Mitchell Grass Downs bioregion in central Queensland and the NT.  The team are on their first trip of the year at the moment and are collecting extensive information on soils, as well as vegetation structure and composition. This information is recorded and will be made publically available through TERN’s Australian Ecological Knowledge and Observation System (ӔKOS) Data Portal. Soil and plant samples will also be contributed to the CSIRO National Soil Archive and regional herbaria.

AusPlots survey sites are located on a range of land tenures, including conservation parks, pastoral leases and Indigenous pastoral properties. Collaboration with landholders is key to the success of the AusPlots program and maintaining these relationships often allows the field team to revisit sites multiple times.  Recognising the importance of this collaboration, an AusPlots project, led by ecologist Mr Emrys Leitch, has recently distributed property summaries to the landholders they have worked with over the last two years. ‘While this isn’t a core part of what we do, it is a very important part of keeping the landholders engaged with what we do,’ says Emrys. AusPlots has delivered reports to approximately 20 landholders throughout northern Australia, including properties owned by the Australian Wildlife Conservancy (AWC) and the North Australian Pastoral Company (NAPCO).

AusPlots is also shifting its attention towards northern Queensland’s ecologically unique and fascinating tall eucalypt forests. It is developing plans to establish monitoring plots in the narrow band of Eucalyptus grandis forest that is nestled between the coastal tropical rainforests and inland savannas of northern Queenland. These plots will provide the final geographical link in a network of forest plots already established in WA, NSW, Victoria and Tasmania.  The project will have clear links with TERN’s Australian SuperSite Network in nearby tropical rainforests and over time may shed light on the processes involved in the observed rainforest incursion into tall eucalypt forests in this region.

The AusPlots team has been busy over the hot summer months processing field samples and data and have just released the data from a significant number of recent monitoring sites via the ӔKOS Data Portal and Soils to Satellites (~130 sites delivered with many more to follow in the coming months) as well as providing a significant number of new soils samples (5952 to be precise) through to the CSIRO National Soil Archive.

The AusPlots team made significant contributions to TERN’s recent book ’Biodiversity and Environmental Change’ and are working on an AusPlots Manual Update, which will be  released in the coming months.

Photo above: AusPlots soils sampling at a plot near the Litchfield Savanna SuperSite in the Northern Territory (photo courtesy Ben Sparrow)