December 5 is World Soil Day, a day to advocate the importance of soil for human survival and promote its sustainable management.

Although most people tend to take soil for granted, according to CSIRO soil scientist Mr Mike Grundy the soil is a ‘rare and precious commodity’.

‘It develops slowly. In human timeframes, it is a non-renewable resource,’ Mike said.

In recognition of the importance of having comprehensive soil information to make good environmental decisions, TERN announced funding in 2011 for CSIRO to lead a new soil-science facility, the Director of which is Mike Grundy. The facility will create a new, fine-scale soil map for Australia.

The facility, called the Soil and Landscape Grid of Australia, is a collaboration between CSIRO, state and territory agencies, Geoscience Australia and the University of Sydney.

‘Soil provides the physical base to support plant growth and the cycling of biological resources; it is the source of nutrients and water for agriculture and forestry systems; it provides a habitat for teeming biodiversity; and it fulfils a complex buffering role against environmental variability, ranging from dampening diurnal and seasonal change in temperature and water supply to the storage and binding of a range of chemical and biological agents,’ Mike said.

‘However, all soils are not equal. They vary substantially in their capacity to support plants and perform the vast range of ecosystem services we depend on.

‘Some soils have naturally very low levels of nutrients; others have nutrients in abundance, and still others have toxic levels of some elements. Some soils can store more than 300 mm of water per metre of soil for plants to use across a growing season; others store less than 30 mm.

‘In an ecological sense, these are not distinctions between good and bad soils. For example, some of our rarest, most diverse and remarkable plant communities occur on low-nutrient, dry soils,’ Mike said.

‘In a land management sense, however, it means that we need to use soils while knowing what they are capable of, and it means that many soils are vulnerable to being pushed beyond their limits.’

Australia’s soil resources are vital for food production and the economy, yet improvements are needed in the information available to help improve land management decisions.

‘Australia does not have an effective national soil map — and our regional or local maps were produced before the current and more complex needs for soil information arose’, Mike said.

The soil and landscape facility will provide comprehensive Australian soils information that will be readily available to current and developing modelling processes, and will also provide uncertainty estimates that will show clearly where more field information is needed.

This facility will build an essential national information infrastructure and, in the process, encourage the development and application of new approaches to soil information around the country. It will also contribute to similar projects in Indonesia, Papua New Guinea and the Pacific as part of GlobalSoilMap.net, a project that is creating a worldwide soil map.

At a local scale, the new soil map will benefit farmers and their advisers, who are increasingly looking for new ways to increase their efficiency – getting more from the same inputs of water, nutrients or energy.

‘The new map is designed to work with models and other systems that are used to analyse and change farm systems’, Mike said.

‘A big opportunity here is to develop “soil apps” for smartphones and similar devices. These will bring together the soil map information, the models, and the local system to guide farm decisions for irrigation, pesticide use, fertilisation and so on.’

At a broader scale, the new soil map will help Australia deal with the complex land-management challenges.

Mike explained: ‘For example, what is the best way to reduce sediment and nutrient movement from the catchments into the Great Barrier Reef lagoon? Where can we increase agricultural production in the north while maintaining the substantial ecosystems values of these systems? How can we balance the land uses in our big peri-urban systems?’

‘Analysing these questions has always needed soil maps – the new map will substantially improve the way we model the options and look for optimal solutions.’ 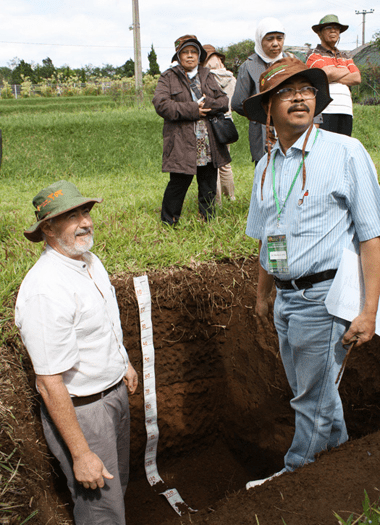