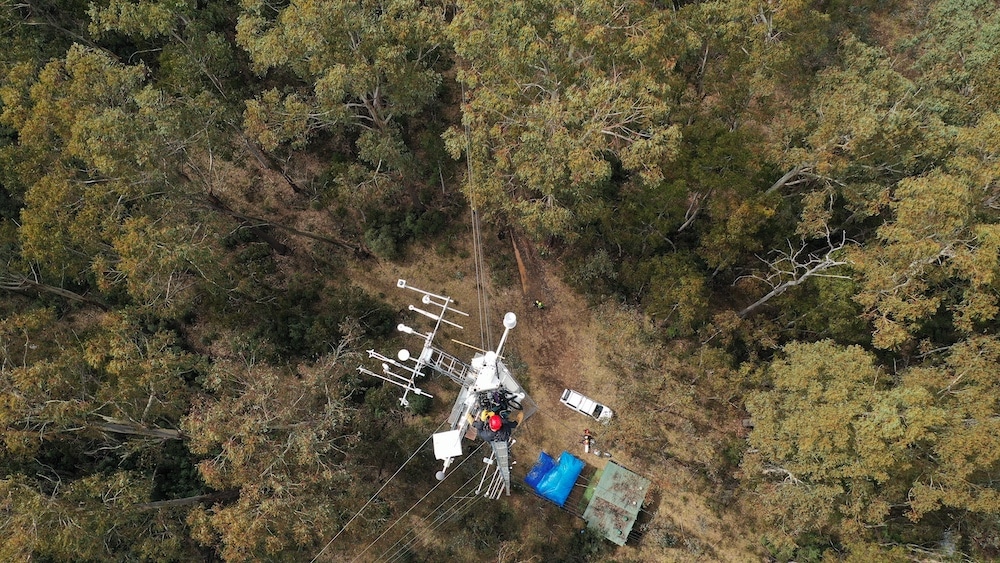 Researchers from Northern Arizona University and the University of Waikato teamed up to determine whether any temperature limits would regulate the carbon uptake of Earth’s terrestrial biosphere.

Using TERN’s open-access data through FLUXNET, the world’s largest continuous carbon monitoring network, researchers determined photosynthesis and respiration changes attributed solely to changes in temperature. Measurements were analysed from every major biome across the globe, over more than two decades.

While the researchers didn’t go into this analysis looking for a temperature tipping point, they certainly found one. 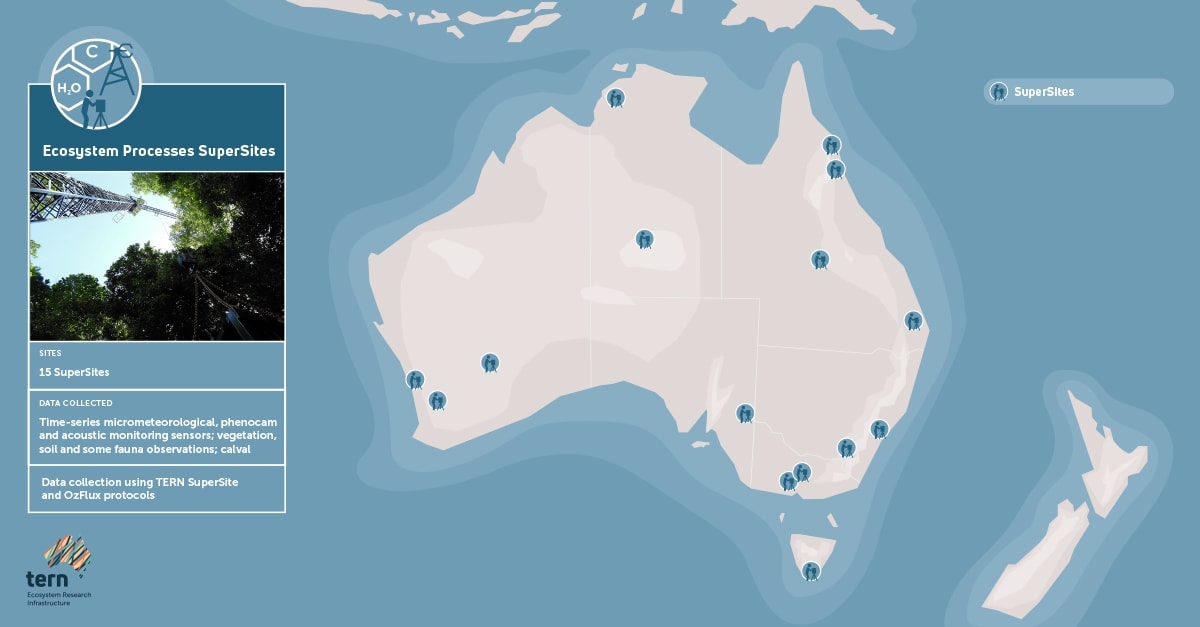 In arid and semi-arid country receiving less than 500mm of annual rainfall.

The largest remaining intact temperate or ‘Mediterranean’ woodland in the world.

Located in the peri-urban area 20kms north west of metropolitan Brisbane in the Samford Valley, QLD.

It is located in the Avon Wheatbelt and has semi-arid warm mediterranean climate.

Located in remnant Eucalyptus species woodland in the Cumberland Plain, at the University of Western Sydney’s Hawkesbury campus in Richmond, NSW.

Located on the Atherton Tablelands in Danbulla National Park within the Wet Tropics World Heritage area.

The site’s climate is seasonal with approximately 60% of annual rainfall falling between January and March. The landform is moderately inclined although rises to 1276m to the north.

Located on the Swan Coastal Plain, 10km southwest of Gingin, near Perth, WA,  land traditionally owned by the Yued group of the Noongar people.

Located near Longreach in western Queensland in the Mitchell Grass Downs IBRA bioregion, that covers approximately 47 million hectares (14% of Queensland and 6% of Australia).

Located in the Bago State Forest, near Batlow, NSW.

Managed, open wet sclerophyll Eucalypt forest, roviding records over a decade on the weather, climate, net uptake of CO2 and loss of water via evapotranspiration.

60km west south-west of Hobart, TAS. It lies partly within the Tasmanian Wilderness World Heritage Area and within State forest.

4 km south-west of Shepparton, VIC on the lands of the Ngurai-illam-wurrung Aboriginal people.

Located in the Wombat State Forest, near Ballarat, VIC.

Investigating the impacts of climate change and disturbances, such as fire and drought, on the dry sclerophyll eucalypt forests in southeast Australia.

Long-term micrometeorological time-series data from 22 TERN sites, including 15 SuperSites (above), were used in the global study

“The temperature tipping point emerged from the data once we had a temperature dependence curve, and compared it to current and future climate,” she said.

This tipping point describes a critical temperature threshold at which plants begin to release carbon into the atmosphere faster than they can sequester it, contributing to atmospheric carbon levels rather than mitigating them.

The data revealed that global photosynthesis rates reach a peak at around 18°C for C3 plants, and 28°C for C4 plants, and declines at higher temperatures, while respiration rates continue to increase without appearing to reach a maximum temperature threshold.

This means that with continued warming, photosynthesis rates will more than likely decline while respiration rates will rise exponentially, tipping the terrestrial biosphere from a carbon sink to a carbon source.

Co-author Professor Vickery Arcus said that the most striking result from this research was “how close in time we are to the [tipping] point”.

Lead author Dr Katharyn Duffy agreed by saying “when we realised that we were beginning to cross the temperature tipping point now, we collectively had an ‘oh no, we must be wrong’ moment”.

“The temperature tipping point of the terrestrial biosphere lies not at the end of the century or beyond, but within the next 20 to 30 years” the study warns.

Biomes that are currently cycling 40 to 70 percent of all terrestrial carbon, including the rainforests of the Amazon and Southeast Asia, and the Taiga forests of Russia and Canada, may be among the first to reach the tipping point and could lose nearly half their carbon sink capacity by mid-century.

According to the study, “while biomes will eventually shift spatially in response to warming, this process is unlikely to be a smooth migration, but rather a rapid disturbance-driven loss of present biomes (with additional emissions of carbon to the atmosphere), followed by a slower establishment of biomes more suited to the emerging climate”.

Lead author Dr Katharyn Duffy said that this study points out that “the ecosystem services that the biosphere currently provides us (climate and otherwise) are far more fragile than we previously realised”.

“We need to account for this fragility when considering climate negotiations,” she said.

The findings of this research were made possible thanks to open-access to more than two decades of ecosystem observations via NCRIS-enabled TERN and similar research infrastructure groups around the globe.

The next step for this research is to better understand how resilient ecosystems will be to temperature changes in the future, says lead author Dr Katharyn Duffy.

“So far, plants don’t appear to be acclimatising to the change, and we think that they’re unlikely to do so to a significant extent in the immediate future”.

However, to track these trends and forecast when we expect ecosystems to experience mortality, we need consistent long-term and spatially diverse monitoring data.

“As we spend more and more time past the maximum for photosynthesis we need to continue to ask these data about temperature effects, keep looking for temperature acclimation, and track lethal temperatures” said Dr Duffy.

The continued provision of the global FLUXNET dataset via its national research infrastructures, like TERN in Australia, is of supreme importance to these research endeavours. 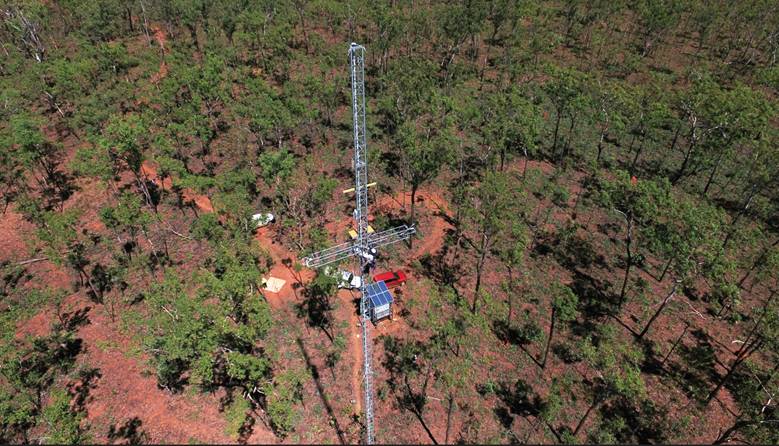